Electrostatic precipitator (hereinafter referred to as ESP) is a device for separating solid pollutants from waste gases of various technological industrial processes before these gases are released into the air or used for further industrial processing.

The principle of electrical separation consists in the fact that gases polluted by solid pollutants (hereinafter SP) flow through the input shaped part into the active part ESP, which consists of a system of grounded settling US-electrodes (hereinafter USE) and a system of charging (radiating) HV-electrodes (hereinafter VNE). ). By applying a high rectified voltage with a negative potential to the HV electrodes, an inhomogeneous electric field is created between the grounded US electrodes and the supplied HV electrodes, and due to its intensity, a corona discharge emits a large number of free, negatively charged ions (electrons) into the environment. These free electrons bombard solid particles of dust that pass through the environment and thus charge them electrically. Due to the force of the electric field, the charged dust particles are attracted to the surface of the grounded US electrodes, where they settle and the electric charge contained by them goes further into the ground.

By mechanical tapping, the settled dust is released from the electrodes and falls into the hoppers. Dust is continuously removed from the hopper. The cleaned gas exits through the outlet part and the piping, usually with the help of a fan, into the chimney and further into the air. To streamline the process and achieve high separation efficiency, ESPs are designed with multiple independent electrical sections arranged in one cabinet in series. 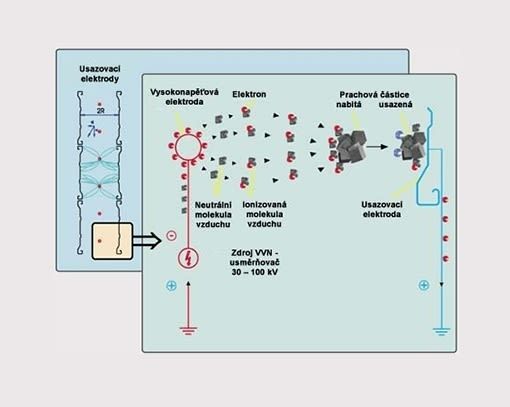